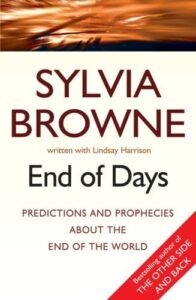 Поднаслов: Predictions and prophecies about the end of the world

Eye-opening predictions about about our nation and the world, from the author of the New York Times bestsellers The Other Side and Back, Life on The Other Side, and Sylvia Browne`s Book of Dreams.

Sylvia Browne turns her psychic wisdom to the puzzling, often contradictory proposed by major historical and contemporary figures, ranging from biblical prophets and Nostradamus to George Washington and Nasa scientists.
In Prophecy,Browne shares confronting insights on topics such as the race for a cancer cure, nuclear war, the possibility of colonising other planets, peace in the Middle East, and dozens of other concerns about the future.

Examining the most notorious voices throughout the ages, Browne offers a clear and fascinating vision of the world as it will be in five,teen,twenty, and one hundred years. Prophecy provides the answers we all yearn for for in uncertain times.

Sylvia`s predictions include:
“This won`t thrill the drug companies who are making a fortune from over-the-counter medications, but the common cold will be eradicated by 2009 or 2010”

“The late 2020s will be a rough, desperate, survivalist time for is. We`ll have to wear protective headgear and clothing in the rain-not to keep us dry but ti keep skin from being badly burned or worse”