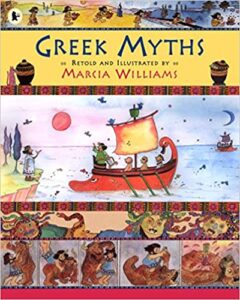 The Greek myths are among the greatest, most exciting stories ever told and feature some of the world’s best loved heroes and heroines. In this book, you’ll find the stories of Theseus, conqueror of the dreaded Minotaur; the mighty Heracles and his twelve tasks; the tragic lovers Orpheus and Eurydice; Perseus, the Gorgon-slayer; the musician Arion and his rescue by the dolphins; Pandora and her little box of horrors; the feather-clad fliers Daedalus and Icarus; and the weaving contest between Arachne and the goddess Athene. Each of these tales has been retold with lively text and dramatic cartoon style, making them accessible and fun for young children.