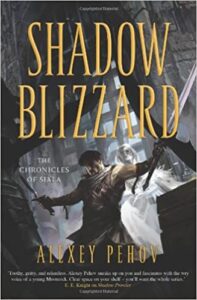 Shadow Blizzard (The Chronicles of Siala)

Shadow Harold, master thief, and his band of companions have reached the deep catacombs of Hrad Spein, where Harold must go in alone to face unknown horrors and retrieve the Horn that will save Siala. He is magically bound to the Key with which the dark elves sealed Hrad Spein, and the Master’s servant, the sorceress Lafresa, is close behind him. Harold and his companions must face H’san’kors, evil magic and the agents of the Nameless One, but unless they find the long-lost Horn darkness will overrun the realm of Valiostr. Harold’s destiny is tied to the fate of the kingdom… About the Author Alexey Pehov is the award-winning author of The Chronicles of Siala, a bestselling series in his native Russia. His novel Under the Sign of the Mantikor was named Book of the Year and Best Fantasy Novel in 2004 by Russia’s largest fantasy magazine, World of Fantasy.