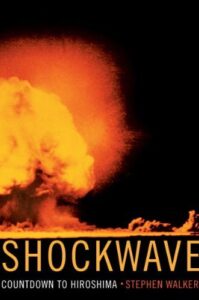 The story of the bombing of Hiroshima presented in a new and dramatic way: a minute-by-minute account told from multiple perspectives, both in the air and on the ground

British feature and documentary director Stephen Walker tells the story of the bombing of Hiroshima in a way only a filmmaker can—not as a dry history of the sad, regrettable, mission, but as an immediate and perilous drama. Walker has extensively interviewed American soldiers, Los Alamos scientists, and Japanese survivors that were involved in the bombing, and thus is able to tell the story through truly alive-on-the-page characters. The result is a narrative that—without either trivializing the tragedy of the bombing or ignoring its importance in WWII’s end—tells the real story of why and how one of the most important events of the 20th century took place. Shockwave might not change anyone’s opinion about the justification of the Hiroshima bombing, but it will provide readers with an unprecedented viewpoint that is sure to educate and enthrall its audience.