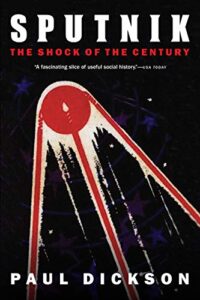 Sputnik: The Shock of the Century

On October 4, 1957, the day Leave It to Beaver premiered on American television, the Soviet Union launched the space age. Sputnik, all of 184 pounds with only a radio transmitter inside its highly polished shell, became the first artificial satellite in space; while it immediately shocked the world, its long-term impact was even greater, for it profoundly changed the shape of the twentieth century.

Paul Dickson chronicles the dramatic events and developments leading up to and resulting from Sputnik’s launch. Supported by groundbreaking, original research and many declassified documents, Sputnik offers a fascinating profile of the early American and Soviet space programs and a strikingly revised picture of the politics and personalities behind the facade of America’s fledgling efforts to get into space.

The U.S. public reaction to Sputnik was monumental. In a single weekend, Americans were wrenched out of a mood of national smugness and postwar material comfort. Initial shock at and fear of the Soviets’ intentions galvanized the country and swiftly prompted innovative developments that define our world today. Sputnik directly or indirectly influenced nearly every aspect of American life: from an immediate shift toward science in the classroom to the arms race that defined the Cold War, the competition to reach the moon, and the birth of the internet.

By shedding new light on a pivotal era, Dickson expands our knowledge of the world we now inhabit and reminds us that the story of Sputnik goes far beyond technology and the beginning of the space age, and that its implications are still being felt today.