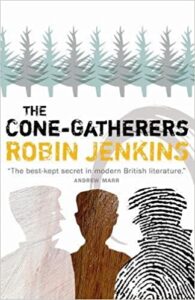 The Cone-Gatherers: A Haunting Story of Violence and Love

Calum and Neil are the cone-gatherers – two brothers at work in the forest of a large Scottish estate. But the harmony of their life together is shadowed by the obsessive hatred of Duror, the gamekeeper. Set during the Second World War, Robin Jenkins’ greatest novel is an immensely powerful examination of good and evil, and mankind’s propensity for both. Removed from the destruction and bloodshed of the war, the brothers’ oblivious happiness becomes increasingly fragile as darker forces close in around them. Suspenseful, dark and unforgettable, The Cone-Gatherers is a towering work of fiction, a masterpiece of modern Scottish literature.